Recent news items have been covering “both sides” of the kratom debate. As presented in this media narrative, one side says kratom is dangerous and deadly, the other side says it’s a life saving plant.

Two such stories ran within two days of each other. One appeared October 27th on Fox4 out of Southwest Florida entitled “Is Kratom a deadly drug or a life-changing supplement?” Two days later, a very similar story appeared October 29 on ABC15 out of Myrtle Beach, SC called “ABC15 Investigates: Kratom- Killer drug or lifesaver?”  Both stories featured a person who says kratom has helped them, and a drug rehabilitation center director who is against the use of the plant. ABC15 also interviewed two doctors who have studied kratom. Fox4 took a more sensationalist route, focusing on Laura Lamon, the mother of a man who died with kratom detected in his system.

From his body language — pausing, stumbling over his words, putting his hand to his face, grinning slightly — it appears that Hill was either caught with a question he didn’t know the answer to, or he was lying. Either way, he was clearly overselling the effects/dangers of kratom for reasons we can only speculate about.

Fox4 Interviewer: “If I were to take kratom right now, what would I feel or experience?”

Stephen Hill: “Um.. you.. Would.. feel .. uh.. quite down (wipes nose) um and probably very shortly thereafter that you would start seeing the psychoactive effects, the hallucinations, visualizations, things of that nature…”

It was here that Fox4 decided to use a visual effect to distort the video, suggesting kratom would give the user a psychedelic effect.

This is, of course, outrageous misinformation that anyone with experience with kratom would laugh at.

Only three hits come up on a PubMed search for kratom and hallucinations. One is a study of multiple drugs from the Spanish journal Anales del Sistema Sanitario de Navarra from 2013. It mentions kratom but it does not claim kratom causes hallucinations, like the other drugs in the study. Another is a Chris McCurdy study from 2008 in Clinical Toxicology about both salvia divinorum and kratom. Salvia divinorum is where the term “hallucinations” is applied in this study. It does not claim kratom causes such effects.

Interestly enough, a third study from this search claims in the abstract that “kratom has been associated with severe signs and symptoms such as hallucinations”, and in the body of the article claims:

“those who overdose on Kratom can experience seizures, psychosis, coma, hallucination, paranoia, severe emesis, respiratory depression and in the worst scenarios, death (13,16)”

This article appeared in Pain Physician Journal in 2017 and is available for free in its entirety. The source they use for this claim? The previously mentioned Clinical Toxicology article, which clearly only mentions hallucinations in reference to salvia divinorum! Another source they use is an article about calls to a Texas poison control center. This article is not available for free, however we can imagine a number of possibilities where hallucinations would be reported by people who have ingested other drugs along with kratom, ingested kratom adulterated with a hallucinogen, or the authors of the Pain Physician article could have, again, conflated the effects of other drugs mentioned in the article with kratom.

PR Newswire ran a story on a report from Jane Babin that addressed the medical examiner’s report of his death. Babin’s report states:

“[T]here is precedent for the Hillsborough County Medical Examiner getting it wrong in high profile cases. It singled out a more controversial substance (cocaine) as the cause of the heart disease that killed OxiClean pitchman, Billy Mays, despite finding painkillers, anti-anxiety drugs and alcohol in his system at the time of his death.  A second autopsy, commissioned by the family, demonstrated that ‘the autopsy specimens and findings were not consistent with the cardiac conditions normally observed in a person chronically using cocaine’ and concluded that cocaine was not the cause of Mr. Mays’ death. Based on the totality of circumstances, any reasonable person could be confident that kratom did not kill Christopher Waldron any more than cocaine killed Billy Mays.”

Even Laura Lamon doesn’t want kratom to be banned outright. According to the Fox4 report, she “doesn’t necessarily want to see Kratom banned, but thinks it should be researched and much more regulated.”

Stephen Hill, who claimed kratom causes hallucinations, doesn’t agree, and said on Fox4: “It absolutely should be banned, it’s like playing a game of roulette.”

I replied to SalusCare’s tweet about this story. So far they did not respond. 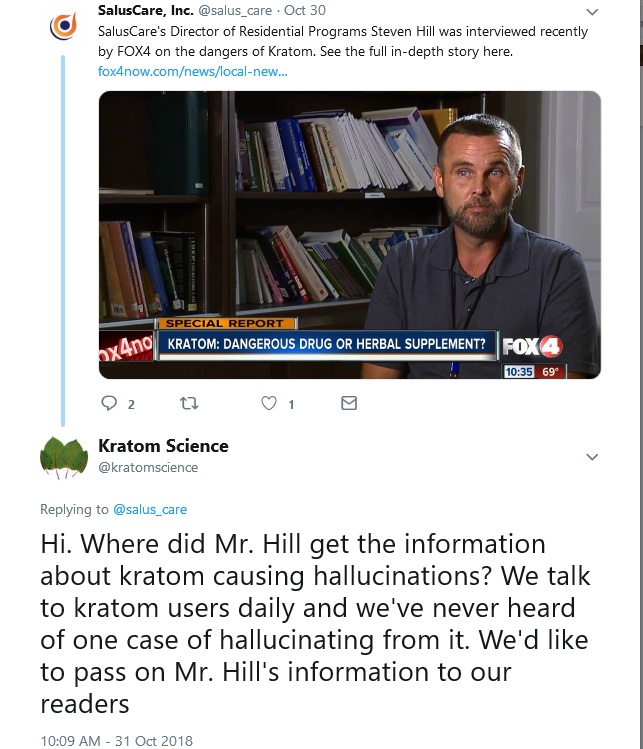