Coffee and Kratom: The Most Exciting Brew You Haven’t Heard About

The Mitragyna Speciosa, or better known as Kratom, is a close relative in the Rubiaceae family to a certain plant species that millions of people around the globe consume daily. Cup wise, we are talking upwards of 2.25 billion cups poured per day. As you may have guessed, or simply read from the page’s title, we of course are talking about coffee.

Here at Kratom Science, we understand the importance of keeping the family close. That is why we have created your ultimate guide for all things Coffee and Kratom.

People around the globe use coffee for a variety of reasons, and like Kratom, not all coffee drinkers fit one particular profile. What we can find however, is overlapping uses, similarities and benefits between the two closely related plants. For instance, both Coffee and Kratom users report consuming to obtain an energy boost, facilitate social interactions, aiding physical performance/stamina, improving focus and enhancing one’s mood. But why are some coffee drinkers substituting their morning routine for Kratom, and others finding that combining the two works as a perfect blend? Let’s break it down.

Starting with the latter, it is important to look at the benefits of coffee, and understand why these benefits go well with Kratom.

Besides a delicious taste and smell, coffee has many perks that you may not know about. For one, coffee is rich in antioxidants, including hydrocinnamic acids and polyphenols (many coffee drinkers acquire most of their daily value in antioxidants this way without even realizing!) The Mayoclinic cites antioxidants as the substances that may, “protect your cells against free radicals, which may play a role in heart disease, cancer and other diseases.” Coffee also contains essential nutrients, and just a single cup contains (via Healthline):

Other positive factors of a caffeinated cup of coffee include: 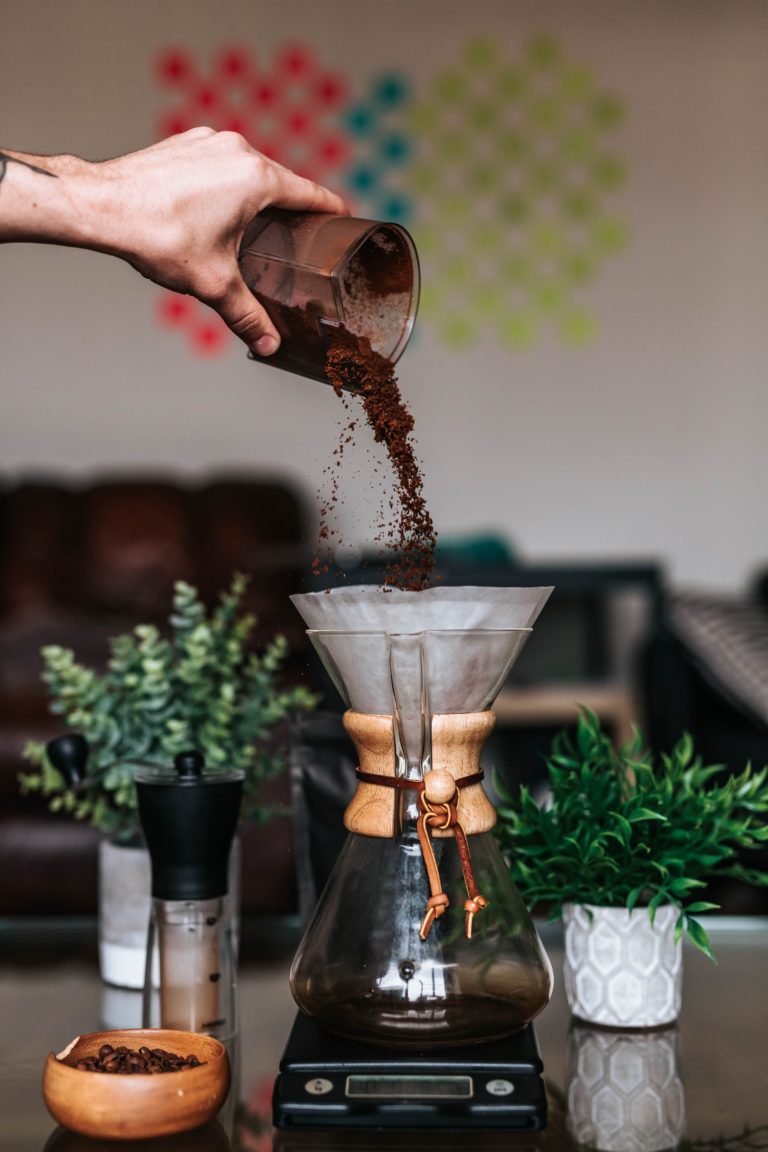 Next, we will take a look at why some coffee users are starting to view Kratom as a substitute for their early morning coffee routine. This boils down to coffee’s main alkaloid: caffeine, or 1,2,7N-t rimethylxanthine, which serves as a central nervous system stimulant and is the world’s most consumed psychoactive drug. It should be noted that many of coffee’s positives listed above are due large in part to caffeine. The drawbacks here revolve around daily consumption in high amounts and underlying conditions.

Obviously, having too much caffeine can make an individual awfully jittery and anxious. It can also make you restless if taken at night at night. Having a “caffeine crash” is a real thing too, and leave some users more tired and irritable than they were before they had their first cup. Kratom on the other hand, provides you a nice boost of energy without the overwhelming jitteriness (we’ll get into that in a bit). Harvard Health additionally noted that “high doses of caffeine can temporarily raise your heart rate and blood pressure, which may pose dangers for some people with heart disease.”

Like Kratom, caffeine is a drug and needs to be taken responsibly in appropriate doses and frequencies. All in all, excessive usage and tolerance are the two main contributors behind people wanting to make a switch, or simply cut back on their caffeine intake.

But what do we get if we combine the two in appropriate amounts? The Perfect Blend. 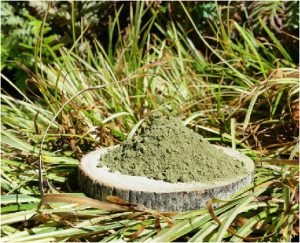 Like coffee, many attribute Kratom to increased feelings of euphoria, increase in physical endurance and boosted energy levels while taken recreationally.

Many testify that Kratom helps with symptoms such as anxiety, cough, depression, diabetes, diarrhea, pain relief, immunity boost, increased focus, sexual enhancement, sleep aid, and opiate withdrawal. Combining these properties with your coffee gives you one super cup of joe! Granted, these effects can and will differ depending on strain and amount of Kratom used. But what develops a strains’ properties?

As mentioned previously, coffee’s main alkaloid is caffeine. In Kratom, the alkaloid of mitragynine was originally believed to be the primary active ingredient, for it is the most abundant. Mitragynine by itself however, was found to have no analgesic properties, and was written off by the medical community back in the 70’s. However, further research done in the early 2000’s by a team of Japanese researchers later proved that the true active alkaloid in Kratom was 7-hydroxymitragynine. A caffeine counterpart, per say. This alkaloid, when consumed in small amounts, provides a stimulated effect. The boost of energy is similar to a cup of coffee, without the jitters. Higher quantities of this alkaloid however, can help with pain relief, relaxation and create an euphoric state of mind. In the world of Kratom, less is more. Keep this in mind when measuring your dosage.

Further information regarding kratom strains, effects and dosage can be found here. 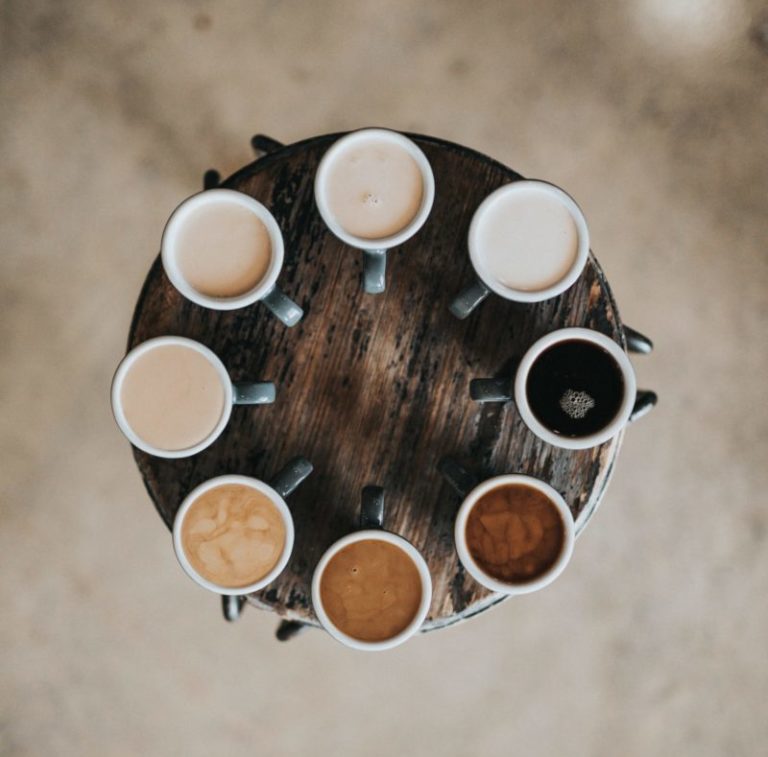 There are several factors involved when deciding your coffee/kratom combo. For one, deciding what kind of coffee you should use. Secondly, finding what kratom strain would blend nicely with your morning routine.

Granted this is all based on personal preference, but these decisions are easily resolved once you figure out what kind of coffee you like to drink.

When it comes to coffee, light roasts contain slightly more caffeine (if you’re measuring by scoops), and in turn, give you more energy. In this case, you will preferably want to select a red strain of kratom. Red is your go to here because it will counteract the jitteriness that comes along with high caffeine content. You will be able to get your desired energy and alertness from coffee, all the while feeling calm and relaxed. Red strains are also said to bring on feelings of well-being, tranquility and pain relief as well. The Red Kali in particular is one of our favorites for light roasts.

We now find ourselves stuck in the middle between light and dark. Well, luckily for us, Kratom too has a middle ground, and it comes in the form of a green vein. Green vein kratom is known for balancing the sedative, pain relieving properties of red strains, combined with the energy and euphoria boost of a white strain. Our personal recommendation is Bali kratom, for it has some of the longest lasting effects of any Kratom, and is considered a smooth, exceptionally balanced experience due to its high concentration of alkaloids. It’s a simpler energy boost, and certainly provides a nice balance to start your day.

If it is the taste that you are after, look no further than mixing your favorite kratom with a dark roast cup of coffee. (Note that dark roasts have more caffeine per serving if you’re measuring by weight). Dark roasts bode well because their bold, bitter/smokey taste easily masks the powdery, earthy taste of kratom. The most important consideration for choosing kratom here is caffeine content. If your dark roast is highly caffeinated, then stick to a red vein kratom. Green vein is also an option here, but make sure to not put in too much and risk being overstimulated.

Decaf coffee is a great option if you love the taste and smell of coffee, but do not care for the jittery, off-the-wall feeling associated with caffeine. If that’s the case, then green and white vein kratom make for a perfect additive. The White Borneo, for instance, is a white vein strain that leans heavily on its energy boosting alkaloids for its stimulating effects. You will get some pain relieving effects, but expect a significant lift in mood and energy when kickstarting your day.

One of the best reasons for combining kratom with coffee is that it will maintain its alkaloids (as long as your water temperature does not exceed 205 degrees fahrenheit). Additionally, adding sugar, creamer or cocoa powder all provide great tastes that help you mask the inherently bitter taste of both kratom and coffee. We did some digging and found out how others in the Kratom Community are preparing their new favorite drink.

Krapuccino! I have an espresso/cappuccino maker. I put about 3g of powder kratom in the bottom of my big coffee cup, brew the coffee that drips down into the cup. In another cup, I mix 1/2 alkaline water with 1/2 French Vanilla creamer, and steam it until it's very frothy. I pour that into the cup, sprinkle cinnamon on top, stir, and drink. Super yummy and effective for about 5 hours.

Aeropress. Holy s**t, it's the best method I've found. I pour hot water into a glass, mix kratom powder with it, add some lemon juice, and let it sit for about 15 minutes to cool down. Then I throw it into an aeropress and essentially make myself a kratom espresso.

I mix kratom and coffee together in my AeroPress. I use 20-30% more kratom than I would for a toss n wash, and let the boiling water sit in the press for at least 10 minutes. Always have great results.

Have you ever brewed coffee and kratom together? Feel free to leave your recipes and comments down below!