Let’s invent a remote island in the middle of the Pacific. We’ll call it Coca Island.

It’s present day. Coca Island is a modern society much like ours. People drive cars to work. Kids take buses to school. There are hospitals, libraries, restaurants, bars, and churches. They have a few big cities and they have suburbs around those cities. They have small towns in the remote countryside surrounded by farms where farmers grow the food for everyone to eat.

For some strange reason, coffee has been foreign to this island until 2003, when a team of ragtag botanists smuggled back a few pounds of beans in their luggage from a vacation in Hawaii.

At first the Cocans didn’t know how to use coffee. They would chop it up and snort it, or combine it with baking powder and smoke it. Some even tried to mainline the stuff.

The Cocans did this because many of them were users of cocaine, a drug widely accepted on the island. Cocaine had always been accepted by the Coca Food and Drug Administration as legitimate medicine that doctors prescribed for everything from lethargy to apathy to boredom to laziness.

But in the past couple of decades, cocaine was being over-prescribed by Cocan doctors who received kickbacks from the big pharmaceutical companies who sold the drug. Quite predictably, more and more Cocans were becoming addicted. They began to develop heart disease at a younger age and die of heart attacks with more frequency. Insomnia, anxiety, and paranoia were reaching epidemic levels.

Meanwhile, the use of the relatively unknown plant, coffee, spread on the island. Cocans discovered the traditional and best method to use coffee was to steep it in hot water and drink it like a tea. They found that coffee was a stimulant like cocaine… not as strong, but strong enough to wake you up and give you a slight burst of energy. They read about people in other parts of the world who had used coffee daily to help them through their workday. In those parts of the world, there were few if any known instances of a person overdosing on its active ingredient, caffeine.

But along with coffee, trouble was a-brewin’. The Coca FDA, like many other parts of the Coca government, was run by officials who had worked closely with big businesses who stood to gain or lose profits based on government policies. CFDA officials had worked for the same big pharmaceutical companies that sold cocaine to doctors.

So a propaganda campaign commenced. The adverse effects of coffee were exaggerated. The CFDA insisted that a person could overdose on coffee, and that it caused painful, explosive diarrhea. Anecdotal information was reported as “evidence” of coffee’s addictiveness and that it caused violent tendencies: 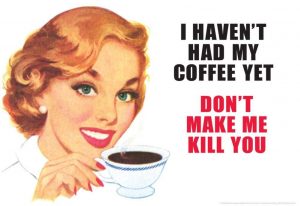 The CFDA released a report on 44 supposedly coffee-related deaths. But any rational person reviewing the report would conclude that these deaths were only correlated with, not caused by coffee. In most cases the users were on other drugs, such as cocaine, alcohol, and heroin. One man who died of a gunshot wound to the chest had caffeine in his system. Another man, 105 years old, was found with a dirty french press on the nightstand next to his deathbed. Never mind that he had died of old age. The CFDA had no trouble classifying this as a “coffee related death”.

Based on this poor research, the CFDA recommended a coffee ban to the Coca Drug Enforcement Agency, or the CDEA. Out of ignorance and fear generated by the CFDA’s shoddy reporting, some of the towns on the island went ahead of the national government and banned coffee in their municipalities.

Coffee advocates on the island thought this was ridiculous, of course. They were using the substance as a safer alternative to the more dangerous cocaine, and to battle depression, fatigue, and constipation. Although there were mild side effects, coffee drinkers were not drinking it to get inebriated, and they weren’t experiencing damage to their health at anywhere near the severity of legal drugs.

An equivalent phenomenon, just as ridiculous, is happening in the United States. Instead of doctors over-prescribing cocaine, they have been over-prescribing opioids which directly led to today’s heroin epidemic. Instead of coffee, people are using kratom to get off the hard stuff, and to relieve pain and anxiety without the threat of overdosing.

Perhaps it is time we stop treating all drugs with lunacy and fear, and study them in order to form a more nuanced perspective. That way, we can weigh the harmful vs. beneficial effects of the drug, and discover the safest possible application. Only then should we craft our laws to assure safety and individual freedom can be effectively balanced.