There are a few popular methods of using powdered leaf, but the most common are “toss and wash“, mixing with food, and preparation as a tea. The following is a guide to help users discover their favorite way to enjoy kratom:

⇒ “Toss and wash” is basically just spooning the powder into your mouth and washing it down with a liquid.
This is the most “difficult” method but likely gives the strongest effects. The powder is incredibly dry and will stick to your mouth and throat, causing many to gag or cough “blow” the dry powder out of their mouth. If using this method of consumption, it is best to spoon small amounts at a time.

⇒ Kratom can also be mixed into a food. 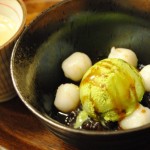 Our favorites recipes include mixing with apple sauce or ice cream!

Other good suggestions include mixing with chocolate almond milk or chocolate protein powder.

Keep in mind that kratom has a strong flavor and may not mix well in certain foods. Also, you will not reduce the efficacy of kratom if you take it with small amounts of food or any of our recommended recipes.

User Food Recipes (If you have a favorite recipe, feel free to send it to us to post!)

⇒ Lastly, preparation as a tea is convenient and effective.
It is important to note that only powdered leaf should be used to make tea. Extracts should not be used.

Start by measuring out between 1 teaspoon of powdered leaf. Using an extract is not recommended, as the hot water may break down some of the alkaloids, there’s no added benefit, and it’s more expensive. Boil 2-4 cups of water. The more water you use, the less strong the flavor, but as long as you drink it all the effects will be exactly the same.

Put the kratom powder into a large cup or container with a pour lip, and pour the boiling water on top. Stir until it is thoroughly mixed. Be sure there aren’t any clumps of dry powder. I highly recommend adding sugar, artificial sweeter, or honey (honey works the best to cut the bitterness), and stir. If using artificial sweetener, 2 packets is a good starting amount. Let sit until cool (at least 15 minutes), stirring occasionally.

Once cooled, allow the powder to settle to the bottom. Pour the tea into a drinking cup, and enjoy! At this point you can add more sweetener to taste, or add water or ice cubes to dilute the flavor. As long as you drink all of the liquid, the effects will be the same.

User Tea Recipes (If you have a favorite recipe, feel free to send it to us to post!)

Double/triple/etc. the quantities to make a bigger batch.