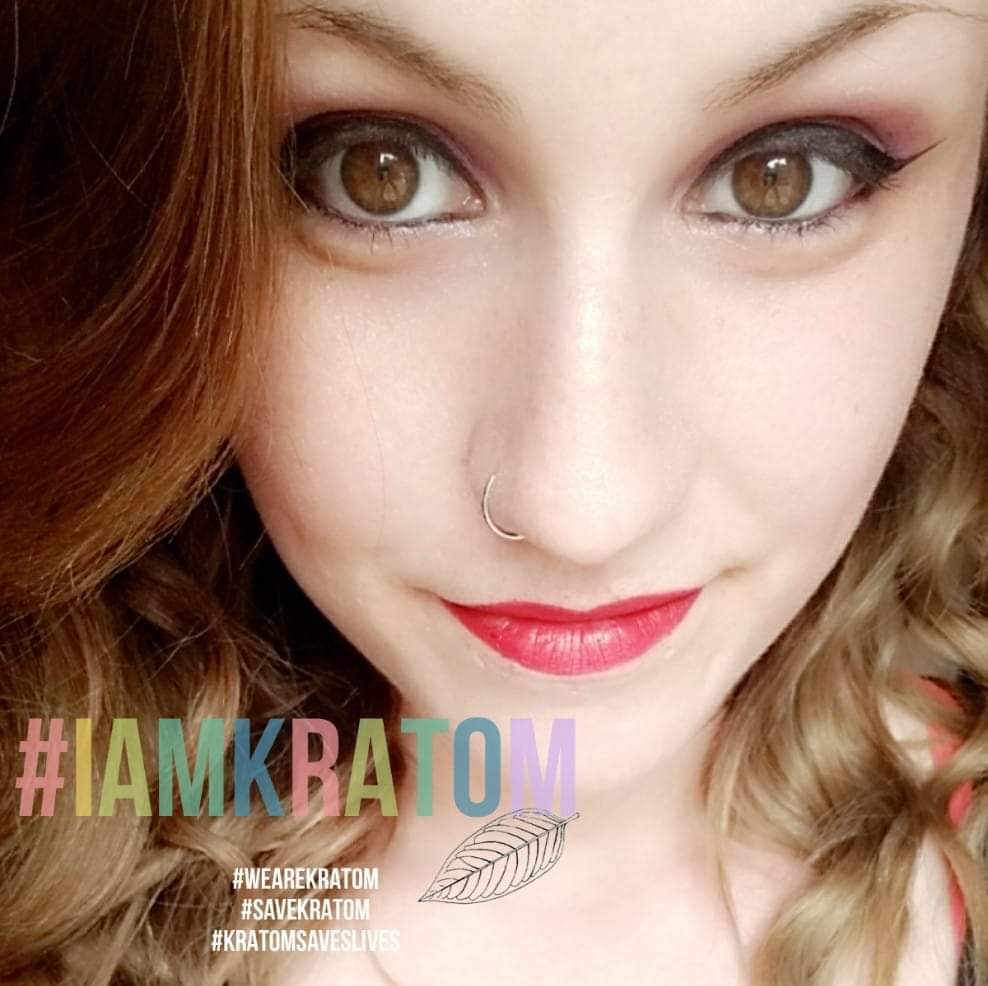 “Hi! I would love to tell you my story. I documented two surgeries with no pain medication and only kratom used. One was oral surgery and the other a cesarean. I also got clean after three years of addiction to opiates and now work for a kratom vendor.“

This is Stephanie Sue from Virginia. She is very active in the kratom community, and even switched careers from convenience store manager to work in the kratom business. Stephanie has documented her experience with kratom online and has been an advocate for keeping kratom legal.

Stephanie Sue: I first started using it in 2013. I incorporated it into my daily routine January 2017.

KS: Why do you use kratom? Did it help you get off opiates or other drugs?

SS: Kratom actually didn’t exactly help me get off opiates. I withdrew from those on my own. It did however keep the cravings at bay so that during PAWS (post acute withdrawal syndrome) and my emotional recovery I could have a fighting chance to get through those times. I also weaned off of my anti-depressants and anti-anxiety meds (wellbutrin, Prozac, klonopin, buspar) with kratom.

KS: Did you originally start taking opiates because they were prescribed to you by a doctor?

SS:  I originally started taking opiates because I get kidney stones twice a year. A friend of mine informed me if you snorted them then you could get a good feeling from them. That’s what hooked me.

KS: What are your preferred kratom strains, dosage, and preparation method?

SS: I started out loving white. Mainly white maeng da (even tho that’s not a strain) and white Hulu. I needed the energy. My whole draw to opiates was the initial energy after they kick in. I used to prepare it like a kratom shot (warm water and kratom in a shot glass). I now prefer white and green blends to combat my fatigue and depression and I have finally mastered the toss and wash.

SS: I experience withdrawals. There’s just no two ways around it. I get watery eyes, fatigue, and sometimes cold sweats. The truth is though…I get withdrawals from almost anything I take daily. I actually have a review group on Facebook with over 500 members who are aware that from November 14th to November 24th I will be video documenting with a short daily video diary my effects of stopping kratom.  I will update you about that as well.

KS: Do you do any activism around keeping kratom legal?

SS: Yes. I do absolutely as much as I can. I started out by live-documenting my oral surgery in April last year, and posting in the large kratom group on Facebook NACU. I didn’t take pain medication after [the surgery] and documented this. Then in June of 2017 I discovered I was pregnant and documented this as well. The past two times we were advised by AKA to contact our reps, I made a post for those who have phone anxiety or have to work to send me their info and I would call on their behalf. I made 246 calls one day last December. I admin for Kats Botanicals and work for Carolina Kratom.

I’m involved in the Facebook community quite a bit. In fact, my child born in February is now known by NACU members, admins, and the owner a personal friend April as Baby NACU. I want nothing more than to make my life Kratom.

Unfortunately the Facebook group [Kratom (New and Current Users)] is a closed group but it’s the large group on Facebook with over 30,000. But if they join the group and search “Stephanie Sue” all posts will come up.

KS: What would you say to a politician who wants to ban kratom?

SS: I would tell this politician that I am one of over 5 million Americans who use kratom and to place a full ban would be diminishing every single one of those people’s quality of life.

KS: What would you say to people who say kratom is just replacing one addiction with another? What’s the difference between your life as an opiate addict and life using kratom?

SS: I’ve had this conversation a lot. And my response is always the same. What about those people who drink coffee every morning? What about those who get a fountain drink to combat that caffeine headache? We all have our vices. There are pros and cons to all of them. Kratom is mine.

My life as opiate addict consisted of me making money as fast as I could, finding drugs, doing drugs, repeat. It was a lot of time and energy wasted. Now I spend every single day working/or advocating for kratom and/or spending time with my children. I have days where I don’t take kratom at all because I’m having a good mental health day. I could never say that when I was an opiate addict.